Room 7
For the whole of the Hellenistic period, Pithecusae remained a lively centre of production of pottery and amphorae, the latter designed primarily to export wine. The black-glaze ‘Campana A’, produced at Ischia or on the mainland, but using clay from the island, date to the third-second century BC. It was a mass-produced item without artistic pretensions which, as a good accompanying the precious cargoes of amphorae, enjoyed a certain degree of popularity in Africa, Spain and southern France as well as in Italy.
As well as coarse ware designed for cooking, food storage and dining, the room also has displays of material found on the acropolis (‘scarico Gosetti’), fragmentary terracotta statuettes of which the outstanding items are small female heads. A head carved from soft rock, which resembles contemporary artefacts made in Magna Graecia (Taranto) and Sicily, may have represented the prototype for the production of clay statuettes.
Exhibits that reflect the thriving craft production of this phase include a terracotta mould of a female head and a head of the goddess Athena, as well as an ex voto with a phallus and engraved inscription KERDAN (kérdos = earnings), discovered during the building work on the spa complex of Terme Regina Isabella (3rd century BC).
Besides being a production centre, Pithecusae continued during the Hellenistic phase to function as a trading port where goods were imported following the routes established after the Roman conquest. The cylindrical vases painted dark red (2nd century BC), known as “sombreros de copa”, which probably contained honey, come from Spain.
The amphorae produced in Ischia often have stamps on the handle bearing the maker’s name: the names are generally Greek but Italic names also appear. Amphorae from Pithecusae have been found in Sicily, Taranto, northern Africa and Greece. Trebius Loisius, who signed amphorae made with clay from Ischia (mid-2nd century BC) and Marcus Anterius both traded in the island of Delos: the two stamps are the only ones written in Latin among over thirty stamps discovered on the amphorae from the area known as ‘scarico Gosetti’. Stamps have also been found on tiles and flat roof tiles: they generally bear the letters DH followed by the abbreviated name of the maker. The letters DH stand for demosìa (keramìs), namely a tile that is public property; in only one case does the whole word appear. In some cases the stamps make it possible to establish the provenance of the artefacts, such as the Rhodian amphorae containing fine wines which can be identified on the basis of the stamps that bear the symbol of the city (a rose), the name of the maker of the amphora and/or the magistrate of the same name).
The room also contains the base of a donarium part of a temple where votive offerings were kept) dedicated to Aristeus which comes from Monte di Vico: the front of the donarium has the inscription “Megacle of Lucius the Roman, (who dedicates it) to Aristeus”. Aristeus was the god sacred to farmers who protected herds of animals, bees and trees, especially olive trees; he moderated the torrid heat and sent the beneficial rain. Since the cult of Aristeus was particularly widespread in Euboea, it is likely that it reached Pithecusae during the period of the city’s foundation and from there spread to Cumae and Neapolis (Naples).

Room 8
The last room of the museum has artefacts dating to the Roman period when the island was affected by numerous volcanic eruptions, earthquakes and landslides which partly changed its appearance. Nevertheless, the island was inhabited continuously on account of the fertility of its soil and its productive activities. The most important settlement of this period was situated between the beach of Cartaromana and the islet of Castello di Ischia on the eastern coast: recent underwater excavations have brought to light a quay and have led to the discovery of important finds such as blocks of galena – the mineral from which lead is extracted, possibly imported from Sardinia – smelting slag, lead sling bullets and other lead artefacts including a large number of lead and tin ingots with the stamp CN. ATELLI. C N. F. MISERINI.
The exhibits also include numerous anchors discovered on the seabed off the islands of Ischia and Procida. An anchor stock discovered on the seabed in front of Punta Cornacchia and a triangular stone anchor come from Procida. A millstone used as a dead weight recovered from the sandbank known as the Secca di Miseno is also on display. A lead anchor stock complete with its collar (the terminal part of the anchor) was found on the seabed in front of Monte di Vico. Other related artefacts from Ischia include an anchor stock with the remains of an inscription in Greek letters from Punta S. Pancrazio and a stock with relief decoration in the form of shells and half-moons discovered on the seabed in front of the Aragonese castle.
The room contains grave goods from burials dating to Roman times: they were mainly built with flat tiles and roof tiles, arranged in saddle-back fashion to form a coffin in which the deceased was laid. The rather small number of grave goods consists of a few lamps, glass or terracotta perfume containers and a few small vases.
Some of the most interesting finds from the Roman period are the reliefs of the Nymphs of spring (Nitrodes or Nitrodiae), semi-deities worshipped near hot water springs situated on the southern coast of the island (municipality of Barano): the museum exhibits are plaster copies while the originals discovered in 1757 are on display in Naples Archaeological Museum. The geothermal springs of Ischia were well-known to ancient authors: Strabo, Pliny, Statius, Ovid and Caelius Aurelianus, a doctor of the fifth century AD, all mention their therapeutic properties. The reliefs mainly represent Apollo playing a zither with two or three nymphs beside him carrying shells or vases from which they pour health-giving water. The scenes are accompanied by dedicatory inscriptions in Greek and Latin which give thanks to the god and the nymphs for being successfully healed.  Their name, like that of their cult site, must be connected with the word ‘nitro’ or soda in which the waters of the spring where the nymphs themselves were worshipped were thought to be rich.

Female head in terracotta, broken at the base of the neck, with decorated headdress. The surface is covered by a white blanket on which the red color is spread; some traces remain. Coming from the Gosetti drain, Monte di Vico (Lacco Ameno), datable to the 4th century B.C.

Triangular lithic anchor, with through holes, found in Forio, off Punta Cornacchia. 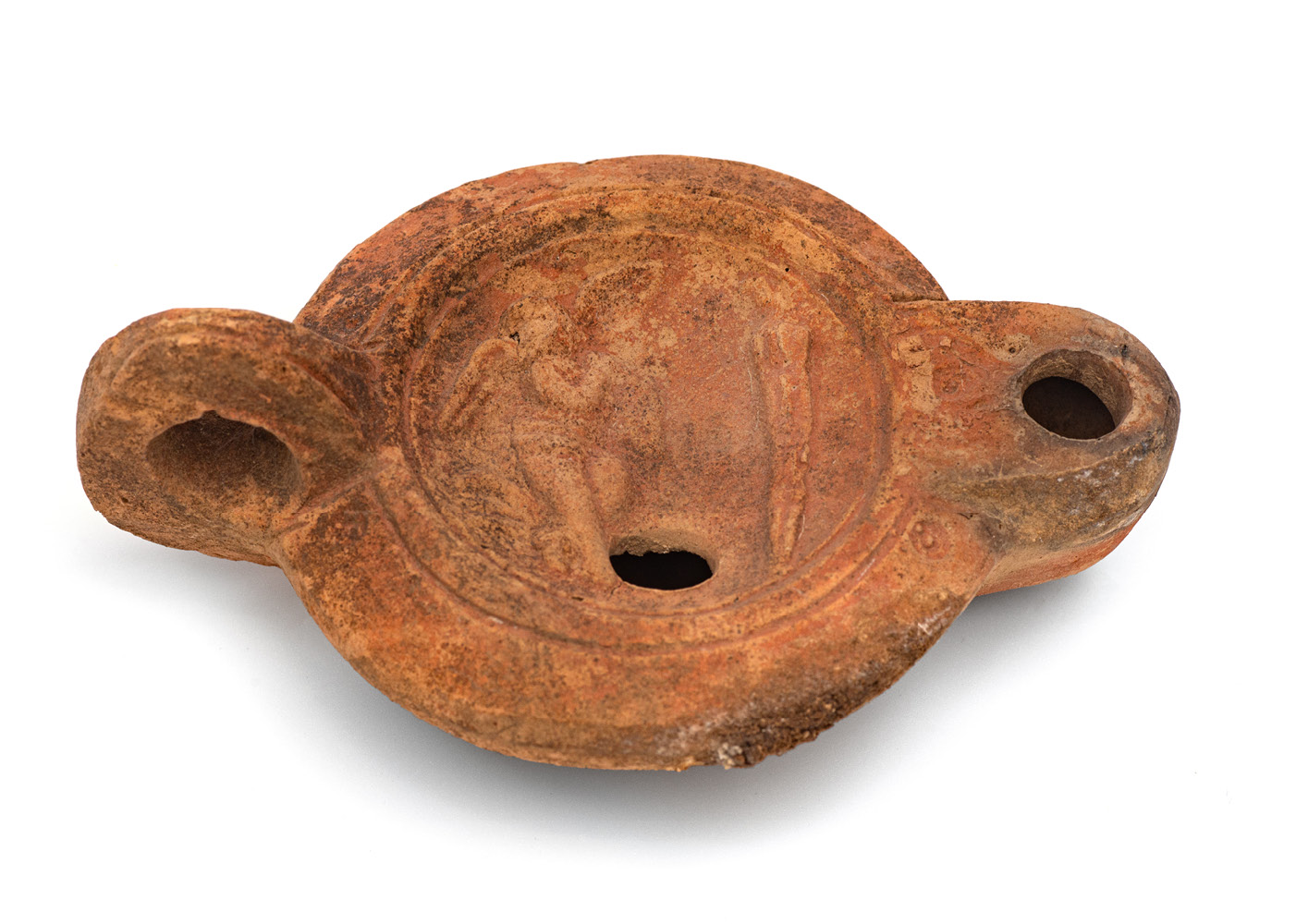 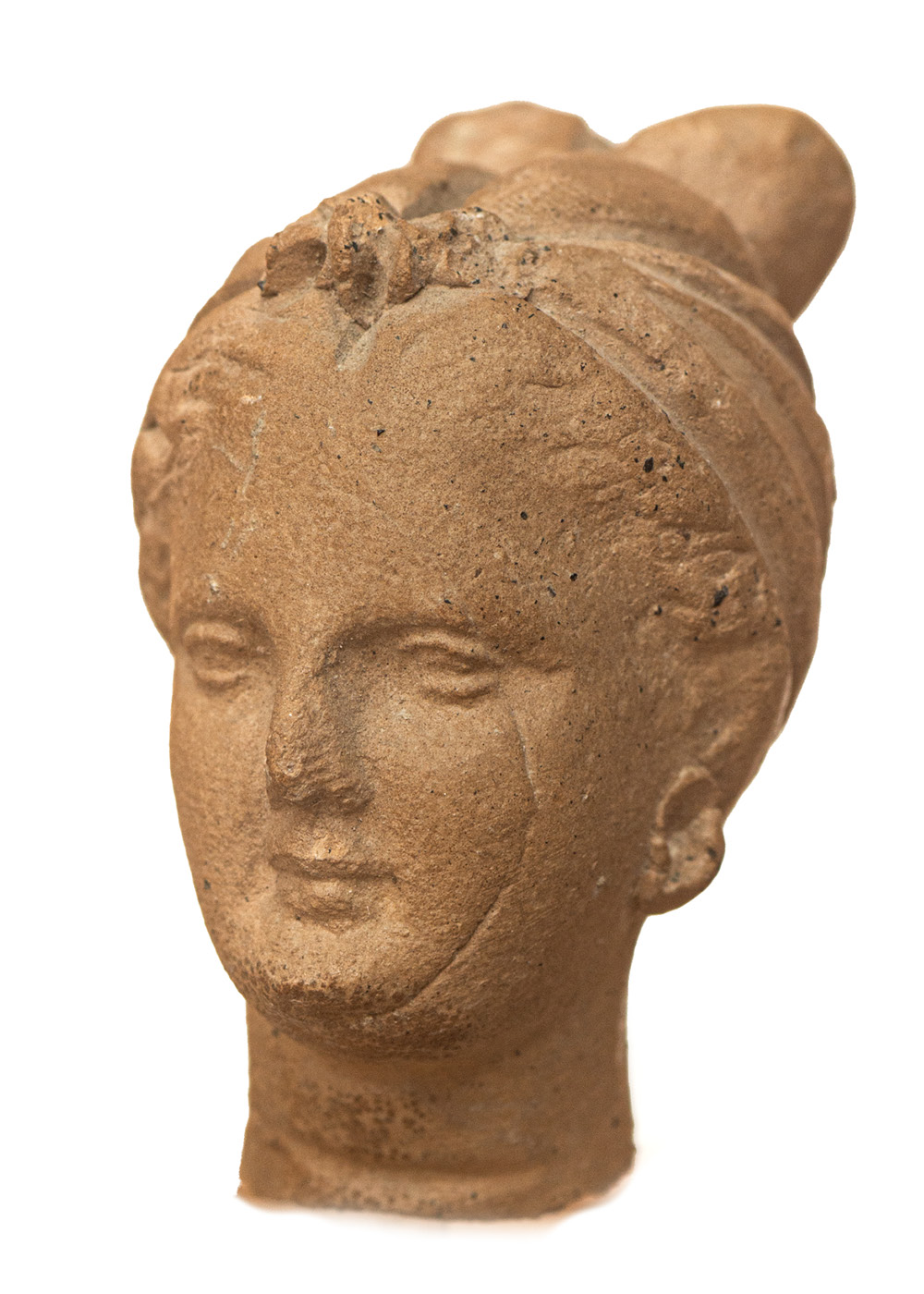 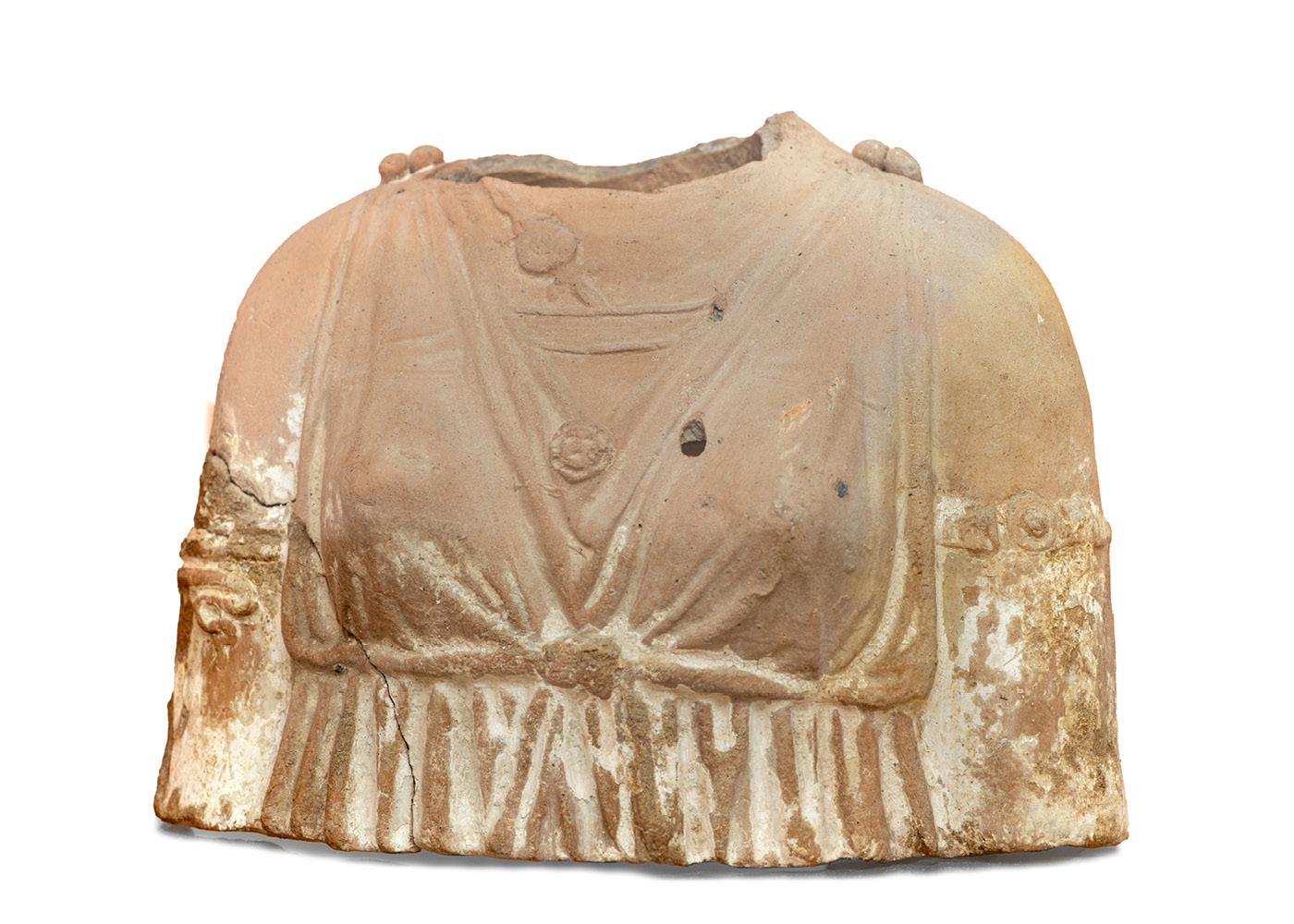 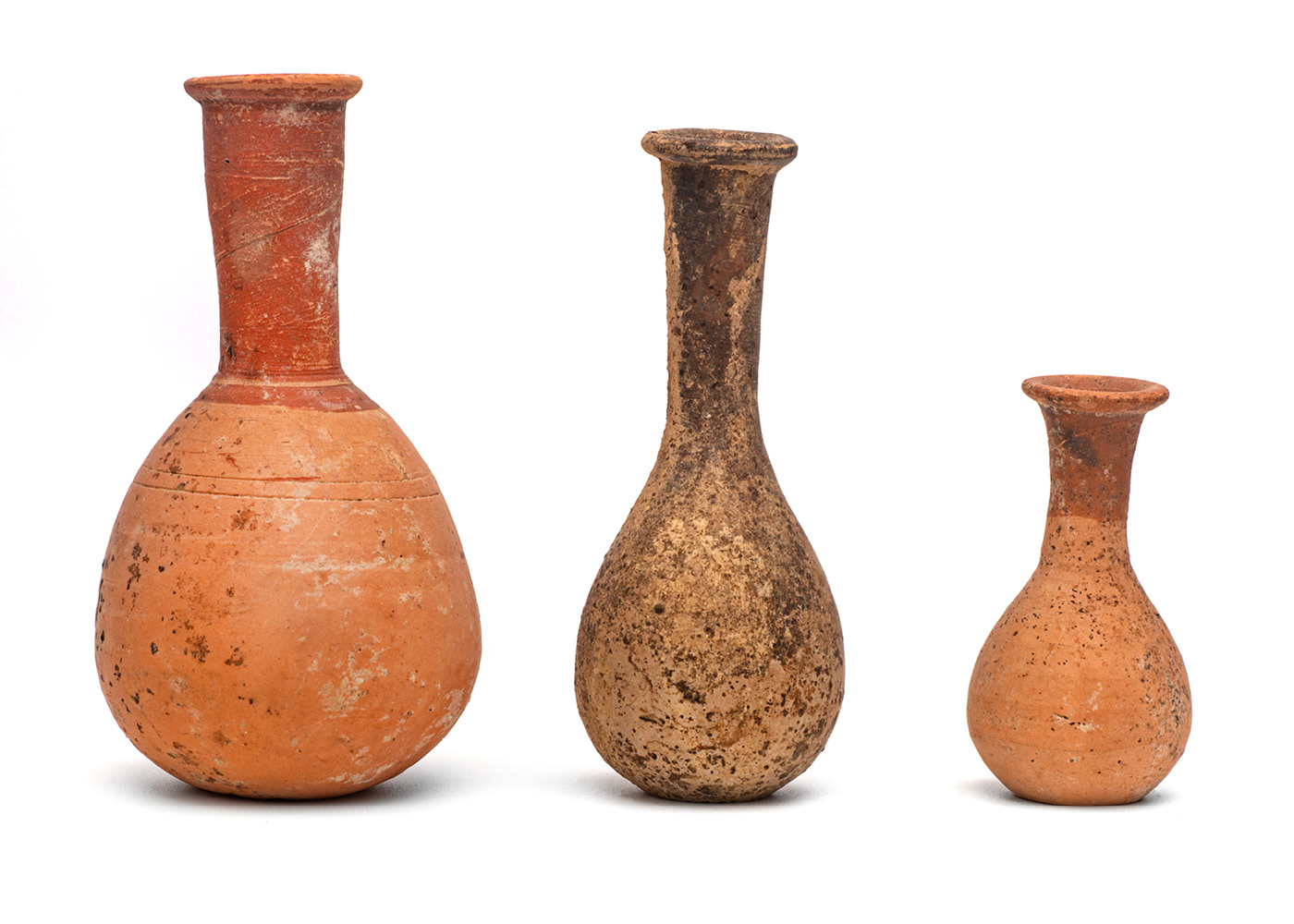 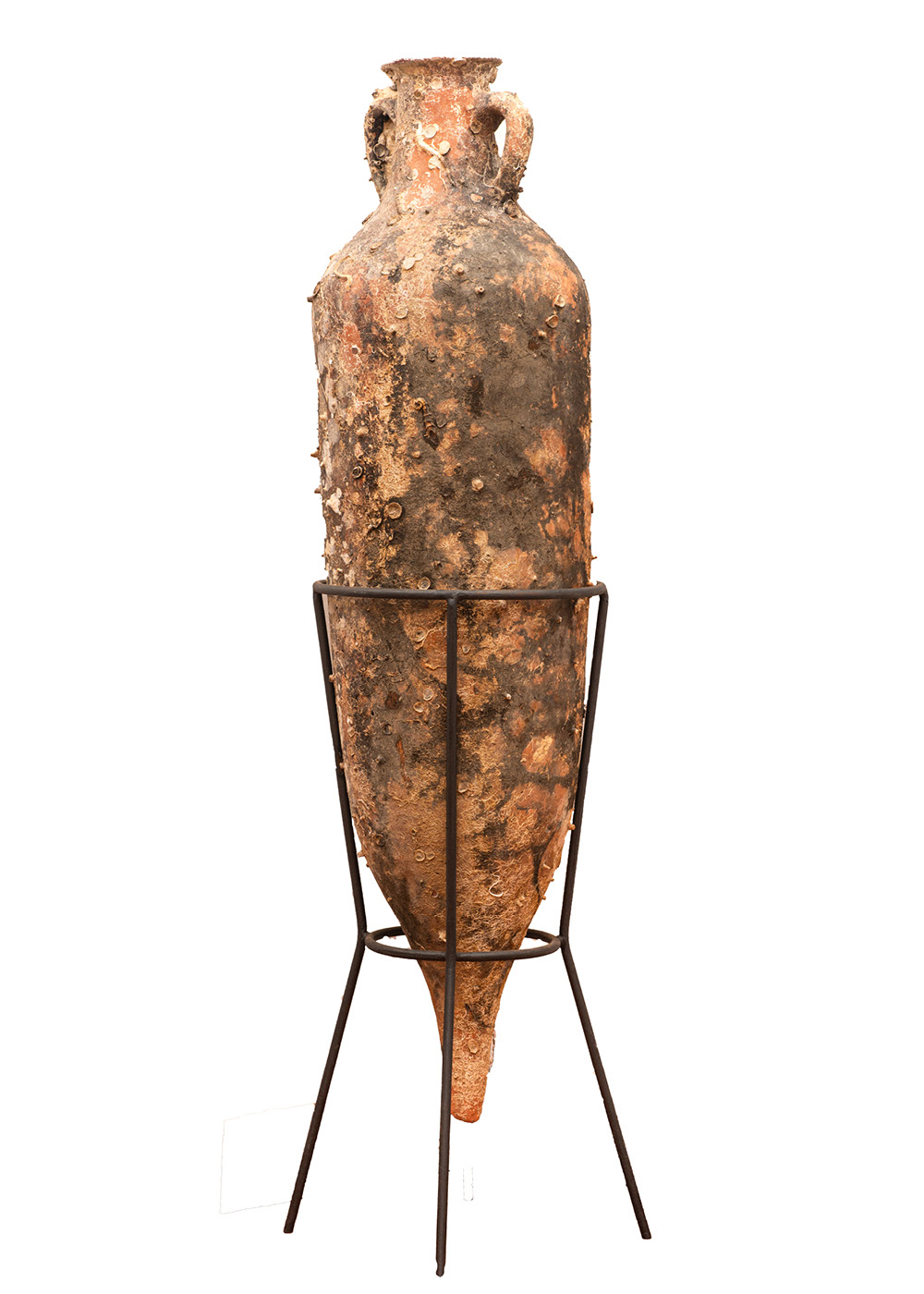 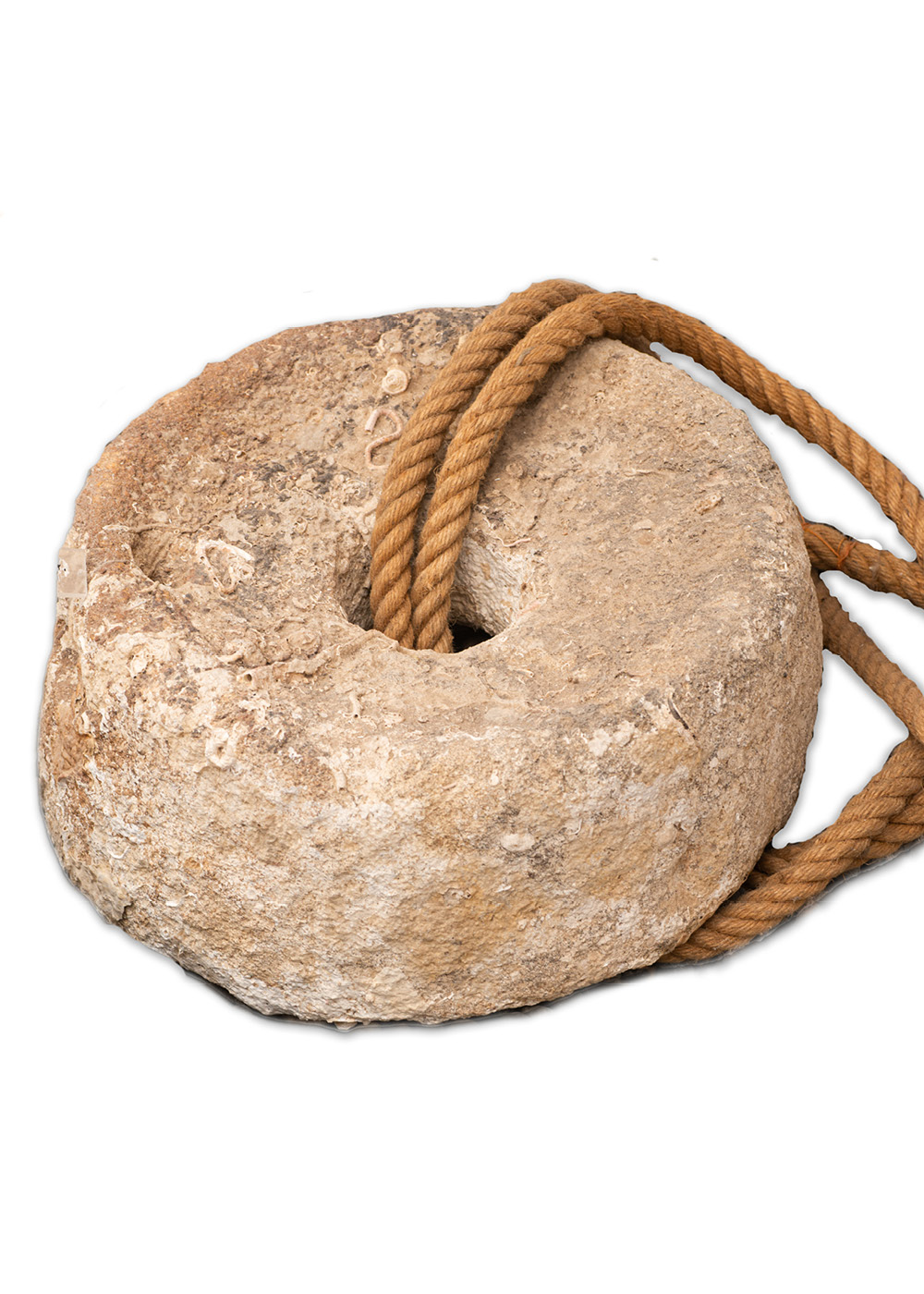