Room 2
The municipality of Lacco Ameno was the site of the Greek settlement of Pithekoussai (Pithecusae in Latin); the finds on display in rooms 2-3, dating from the eighth to the seventh centuries BC, come from the necropolis of San Montano and from the areas of the settlement (the Mazzola and Pastola districts and Monte Vico). They shed light on both the behaviour related to death and the funerary ideology of the colonists, and on the everyday life and trade networks involving the Near East and Greece, Apulia, Ionian Calabria, southern Etruria, Sardinia, Spain and Africa.
In the necropolis the children were inhumed inside amphorae or large pots (enchytrismoi) while adults were cremated and their ashes were placed beneath a large mound of stones. The grave goods consist of local pottery (Late Geometric fine wares, coarse ware and amphorae) and imported artefacts (Euboean, Corinthian and Near Eastern pottery, amphorae from Greece, the Greek islands and the eastern Mediterranean, impasto wares from Etruria, Latium and Campania). Female burials contain bronze ornaments and the richest graves had fibulae and hair rings made of electrum and silver; exotic objects appear in some graves, generally those of children, such as seals from the Aegean (the ‘Lyre-player seals’), Egyptian amulets and talismans, which had an apotropaic function, warding off bad luck.
One of the most important artefacts is the famous scarab with the cartouche of the pharaoh Bocchoris (718-712 BC), discovered in a burial (grave 325) which is one of the chronological cornerstones of Mediterranean archaeology.

Room 3
This room contains some of the most important and celebrated finds from Ischia, dating to about the late eighth century BC: the celebrated ‘shipwreck krater’, a locally-produced Late Geometric vase used for wine, decorated with a fascinating figurative scene, and the famous ‘Nestor’s cup’, made in northern Ionia, which has one of the oldest inscriptions in Greek verse in the western Mediterranean.
The various artefacts from the Mazzola area, the site of a metal-working craft district, include a fragment of a krater bearing a painted inscription that indicates the name of the potter: ‘…inos m’epoise(v)’ (…inos made me): it is the oldest-known signature of a Greek artisan. The name is incomplete like the drawing of the winged creature depicted beneath the name, which has been interpreted by some scholars as a sphinx.
A small section is devoted to the inscriptions which document the close relationship between the Greeks of Pithecusae and peoples from the Near East, essentially Semitic peoples (Arameans and Phoenicians) who lived on the island during the second half of the eight century BC.  The first document is a transport amphora from grave 575 (Late Geometric I) which is incised with graffiti that refer to the use of the amphora as a commercial container and as a funerary vase: the word “Kpln” (“double”) is written in Phoenician letters while one of the handles is incised with numeric signs interpreted as “200”, a number that may refer to the container’s capacity. The secondary use of the amphora as a funerary vessel for a small child is indicated by a triangular sign, which is probably a Semitic religious symbol, well-known in Phoenician and Punic contexts. Inscriptions in Phoenician script also appear on a miniscule fragment of a drinking cup (kantharos) made in Pithekoussai, dating to about twenty years after the amphora in grave 575, and on a dish made in Phoenicia.

Kotyle imported from Rhodes with graffiti inscription in verse, known as “Nestor’s Cup”, found in Tomb 168 of the necropolis of San Montano (Lacco Ameno), around 725 BC. The cup is engraved with three verses in the Euboic alphabet that allude to the famous Cup of Nestor, described in the Iliad. The text reads: “Nestor’s… the cup good to drink from. But whoever drinks from this cup, immediately the desire of love for Aphrodite with the beautiful crown will seize him”.

Crater painted with a shipwreck scene, sporadic, from the necropolis of San Montano (Lacco Ameno), end of the 8th century B.C. It is one of the oldest examples of figurative vase painting found in Italy. The scene reproduces a sea full of fish and men trying to save themselves. Under a large upturned ship, sailors are represented swimming for escape, while one of them has already ended up with his head in the mouth of a huge fish.

Barrel-shaped vase with painted decoration, found in Tomb 984 of the necropolis of San Montano (Lacco Ameno), second half of the 8th century B.C. The vase, with its particular barrel shape, was found in a cremation tomb. On the neck are depicted three women with the spindle, probably to be identified with the three Fates who, traditionally, “spin” the destiny of men.

Fragment of a painted crater, found in the artisan district of Mazzola, end of the 8th century B.C. The small fragment of the rim and shoulder, pertaining to a crater, bears a retrograde painted inscription “… inos m’epoiese” (“… inos made me”), one of the oldest testimonies relating to the signature of a potter. In addition to the incomplete name, we can see the drawing of a winged figure, difficult to read, probably to be identified with a sphinx. 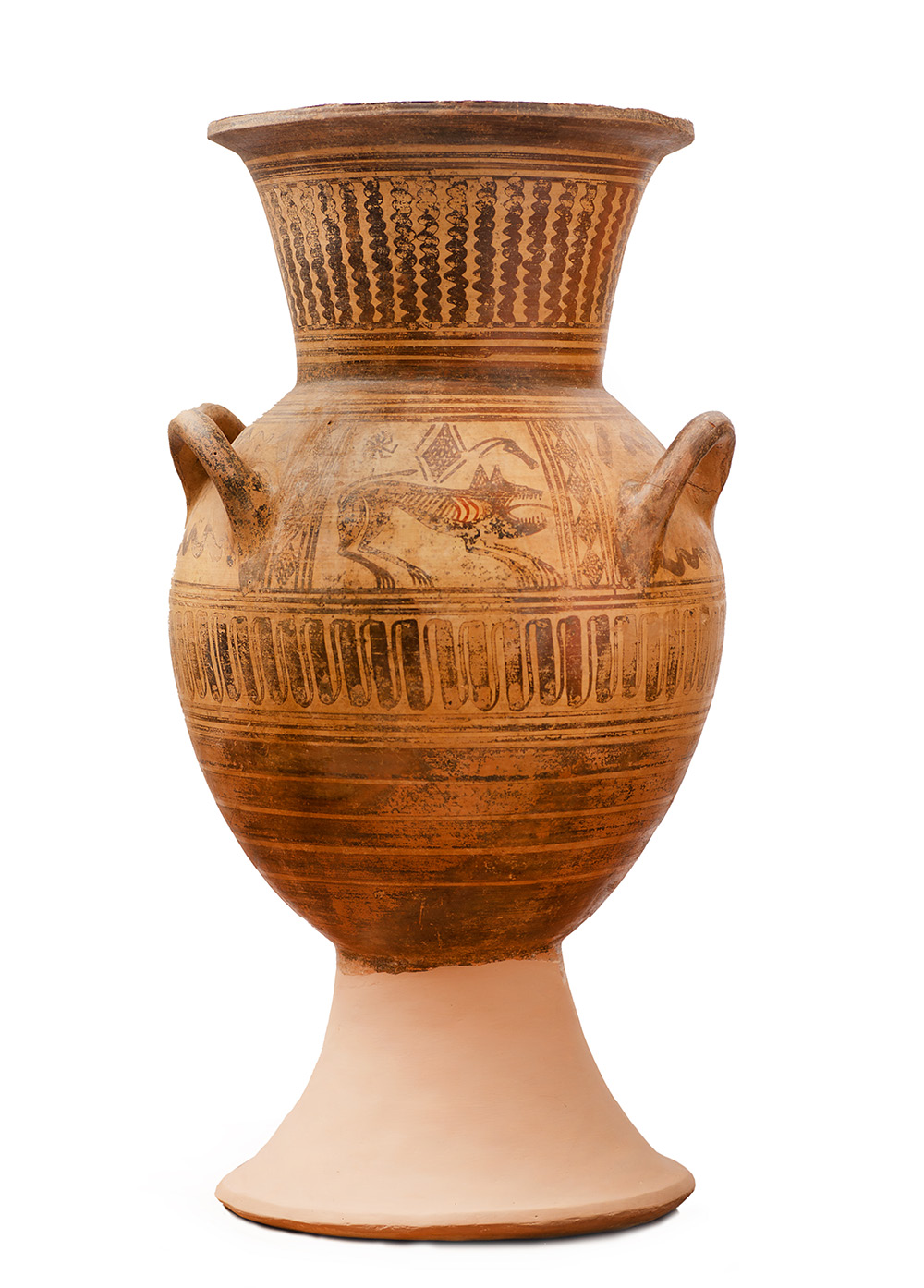 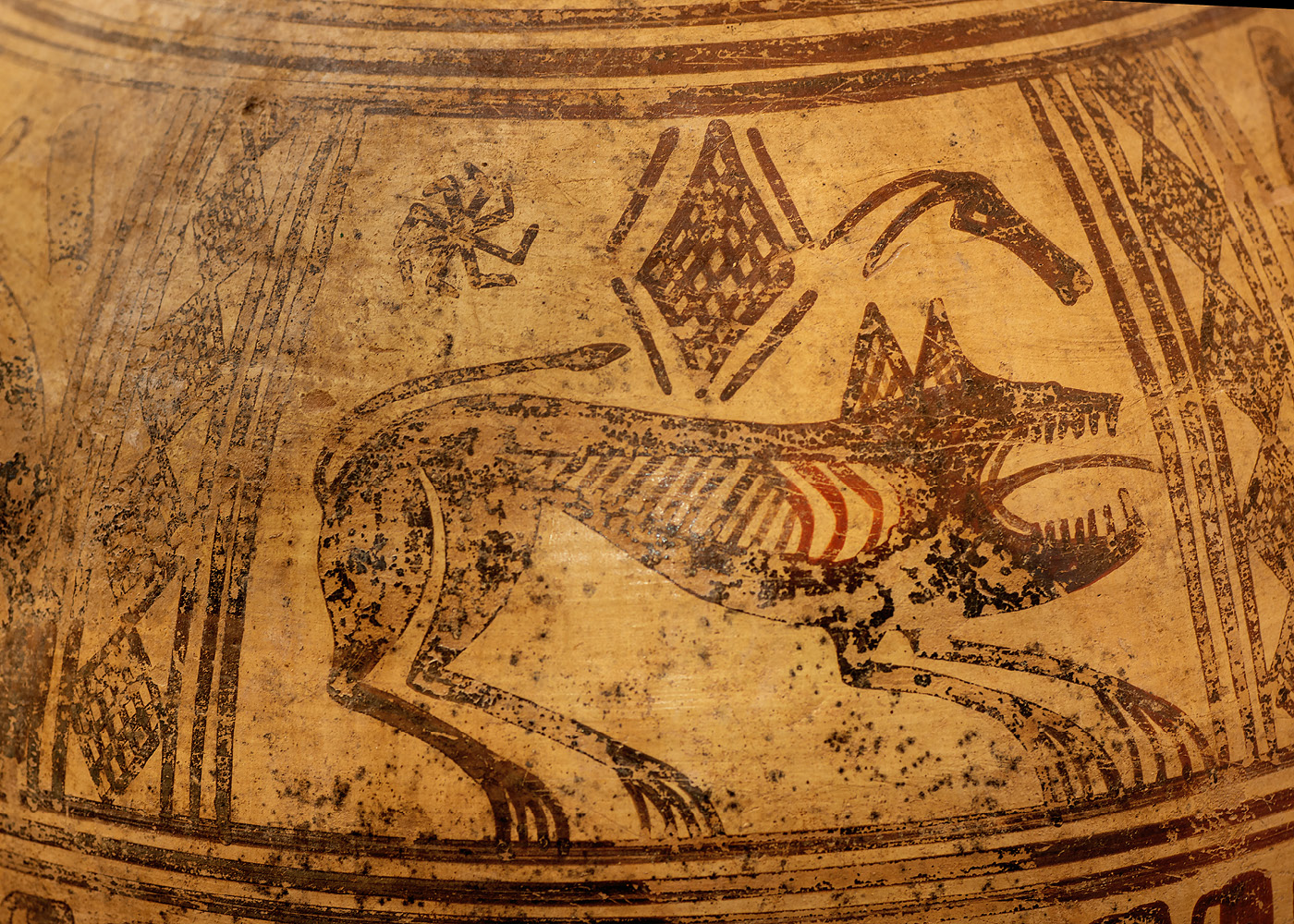 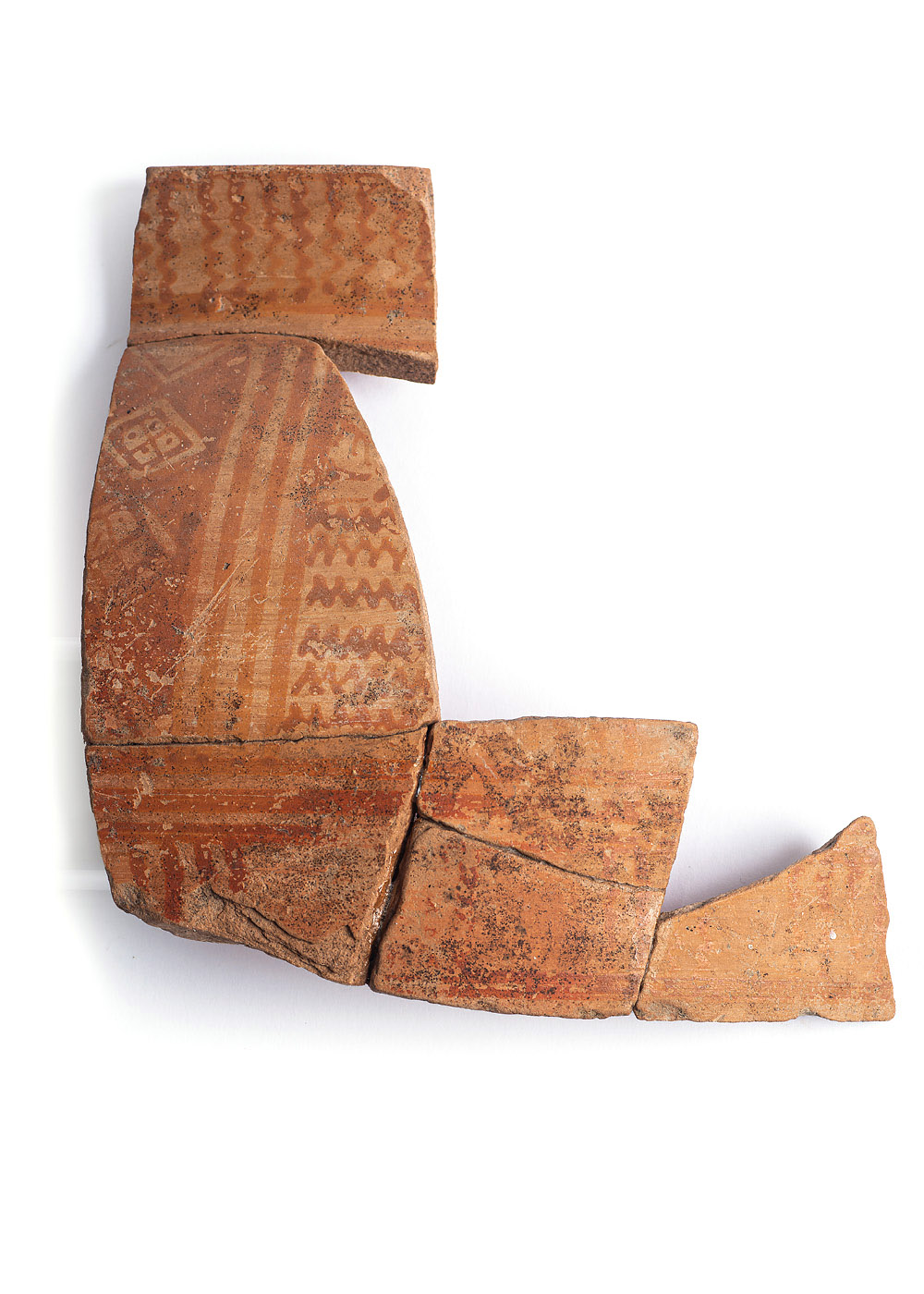 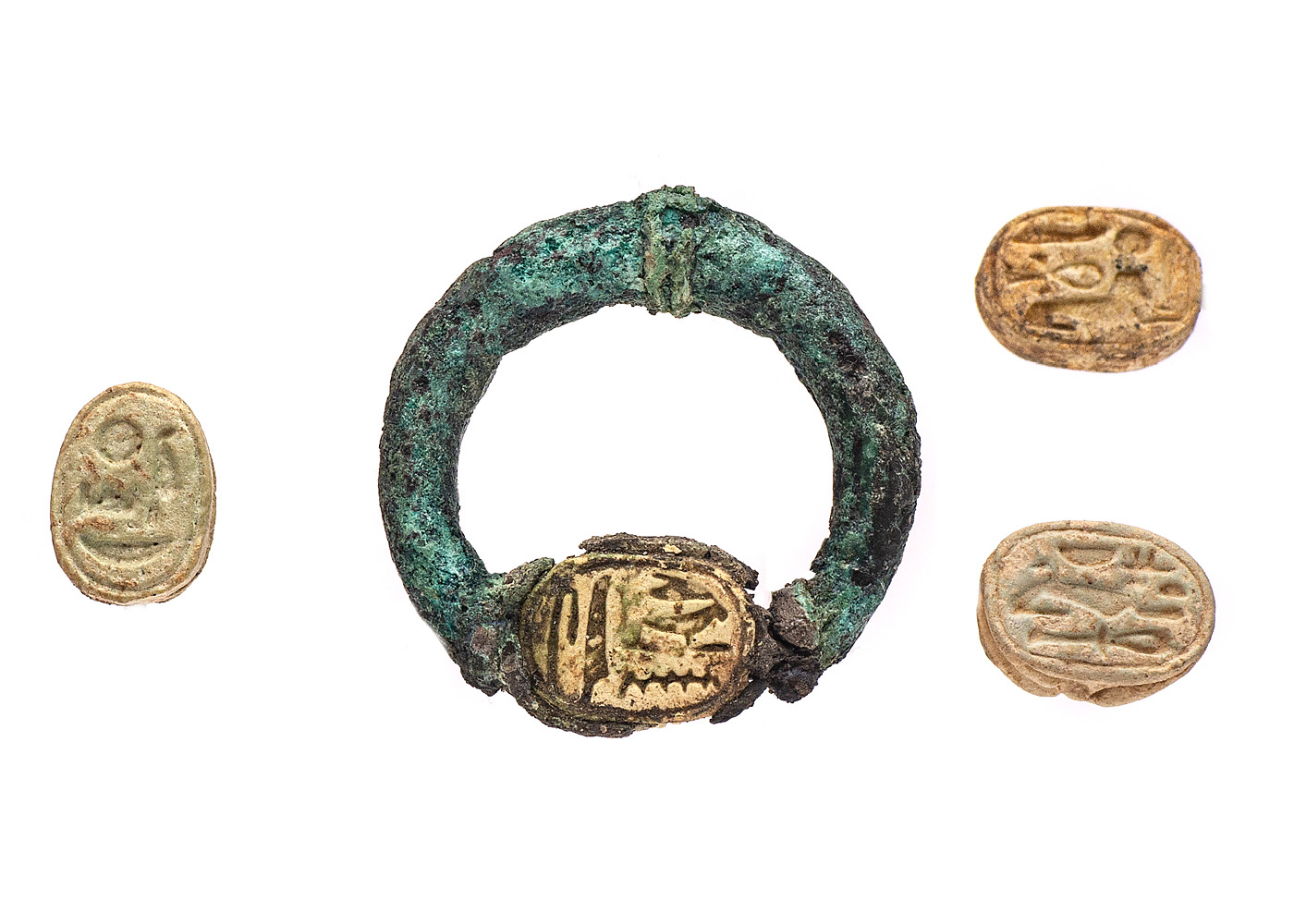 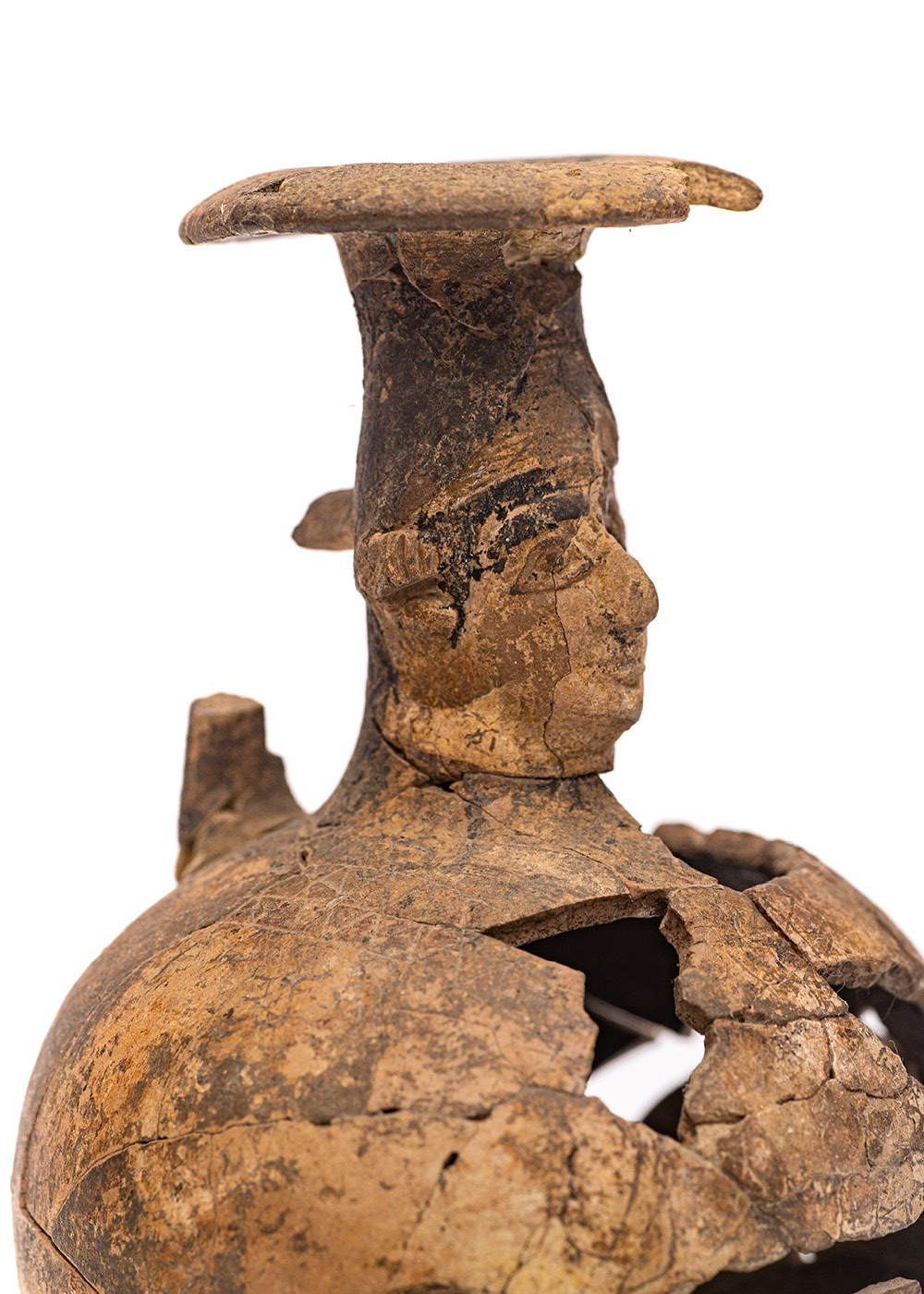